I recently came across this article “Genetics Will Change Vaccination and Other Drug Administration” that encapsulates the recent developments in the field of bio-science and medicine and drug administration focussing on a personalized level, tailor-made to suit every individual’s needs and demand throughout their life-time on one of my favourite blogs, Money FYI and thought I would do a recapitulation of a part of text from an old article “September Round Up“

Here’s some highlights from all the interesting stuff I came across. (Note: Working on animal models isn’t a direct part of my line of study/specialization, but life sciences are interdisciplinary so we need to understand how the basic aspects of all related fields of sciences work and how when utilized together, they can produce certain results that would not have been possible without conjunction).

I will highlight some of the interesting stuff I came across and also about the topic in relation to post’s title.

There are many studies that are being conducted to identify naturally occurring substances that can be used to treat cancer. A certain plant has been discovered and the volatile oils it produces is now being used to treat lung cancer. The oil is used in an inhaler since surgery is not possible in lung cancer cases.The Hungarian Pig is used as a model to study obesity and diabetes in Humans. Monkeys are sometimes used as they exhibit engagement in new and risky practices and behaviour much like young human beings engage in high-risk social behaviour like drinking, smoking , doing drugs and having multiple sexual partners.

Cosmetic manufacturing companies are also using the data from HGP and based on genetic variability are coming up with products such as these (GENIFIQUE by Lancome): 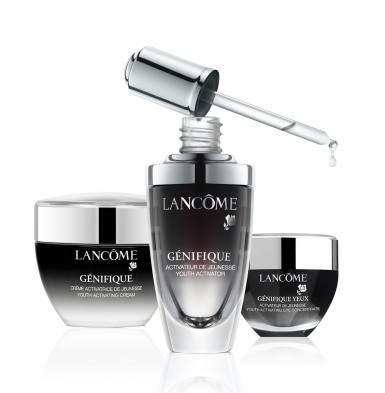 Anti aging creams such as these use the protein products of certain genes that are responsible for slowing down the again process.